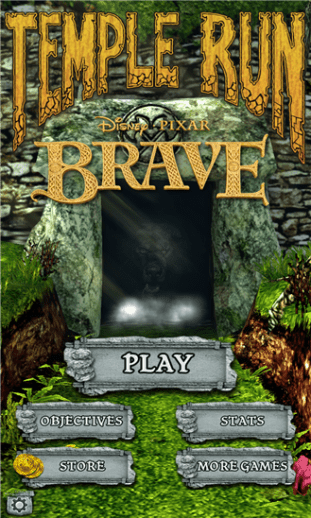 Slowly & steadily the Windows Phone ecosystem is building up & the latest to join it is ‘Temple Run Brave‘ from the developers IMANGI & DISNEP PIXAR.

Whether it is better than Temple Run 1 ? .. well the reviews say that it does not lag, touch is responsive & the graphics are awesome ! The game costs $0.99 or Rs. 55.

The hitch – It has been released for 1GB RAM devices for now !

Here’s what the Game description reads

TEMPLE RUN: BRAVE IS AN OFFICIAL APP FROM IMANGI AND DISNEY/PIXAR WITH AN ALL NEW LOOK AND NEW ARCHERY FEATURE!

From Imangi, the makers of Temple Run, and Disney comes a new take on the most exhilarating app in the App Store. Join Merida from Disney/Pixar Brave as you run, slide, jump, turn and shoot your way across the wilds of Scotland on an endless running adventure!

Also includes all the great features from Temple Run:
• Simple swipe and tilt control that are easy to use and just feel right
• Level up your character and use crazy power-ups
• Endless play!