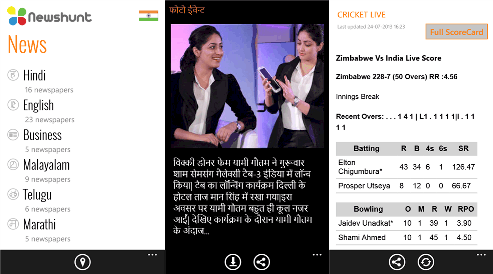 ‘Newshunt’, is actually a news application that pulls data from 85+ regional newspapers in 11 languages from India. It also includes newspaper from Bangladesh & Africa.

Here’s what the app description reads

NewsHunt, India’s #1 mobile newspaper app brings together the News from 85+ regional newspapers in 11 languages from India.

‘NewsHunt’ is free and is used every day by millions of users around the world.

– Recipient of GSMA Mobile Awards 2013 for Best Mobile Publishing Product.
– Winner of mBillionth Award 2013 for News & Journalism.
– Number 1 News App on Google Play in the free ‘News & Magazines’ category.
– India’s Best News App & in top 10 smartphone consumed apps across all platforms by Neilsen  Consumer Rankings.
– Named the ‘Most Downloaded News App’, by GetJar.com with over 8 million downloads till date.
– Users spend more time on NewsHunt than on YouTube, according to a report by Nielsen Informate  Mobile Insights.