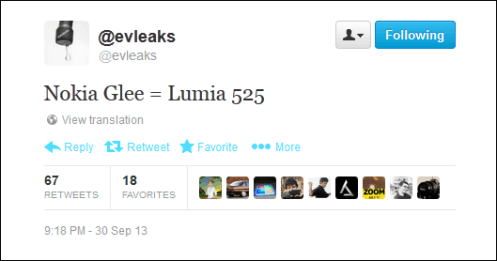 It is said that the Nokia World event scheduled this 22nd Oct in Abu Dhabhi, UAE will see Nokia unveiling 6 new devices .. of which 3 are expected to be Lumia’s & the other 3 to be Asha’s.

About ‘Glee’, evleaks is claiming it to be the Lumia 520 successor and one which will be Music focused. Good change if to say & we probably will see better hardware too which will enable Glance & Double tap to awake .. hopefully.

While Nokia Lumia 520 is already creating waves across the world with its sales, it seems Nokia does not want to take any chances & is proactively working on its upgraded version to further continue & build on its momentum.