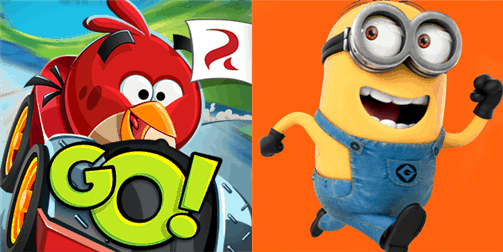 11.12.13 turned out to be a great day on games front for Windows Phone as two high profile games from popular developers made an appearance – Rovio’s ‘Angry Birds Go!’ and Gameloft’s ‘Minion Rush’.

‘Angry Birds Go!’ is a down hill racing game where you compete with bad piggies on adventurous roads & on the way earn coins, make use of powers, change birds & upgrade vehicles/carts too.

The game is currently available for only 1GB RAM WP devices but Nokia has officially confirmed that it will soon be released for all WP devices which means the 512MB RAM devices.

Welcome to downhill racing on Piggy Island! Feel the rush as you fling those freewheeling birds and piggies down the track at breakneck speed – with plenty of twists and turns in a thrilling race to the finish line! But beware! Look out for hazardous roads, mischievous opponents riding your tail and special powers to put the race leader behind the pack. Plus, go from soapbox car to supercar by upgrading your ride! Ready…Set…Angry Birds Go!

FIRST-EVER 3D ANGRY BIRDS WORLD! See the birds and pigs from every angle as Piggy Island comes alive in this rich and colorful 3D world!

RACE AS THE BIRDS OR PIGS! Jump behind the wheel and race as Red, Chuck, Terence, Stella, King Pig, Moustache Pig and many other favorites!

AWESOME SPECIAL POWERS! Smash your opponents off the road and take that winning position thanks to unique special powers for each character!

UPGRADE YOUR RIDE! From a homemade soapbox car to a super-fly supercar, with tons of karts and awesome ways to upgrade – yours to earn or purchase!

MUCH MORE TO COME! The race has only just begun – so look out for many more fun things coming your way!

Download ‘Angry Birds Go!’ from Windows Phone Store below. The game is 99MB in size and would need a WiFi connection for download.

Minion Rush on the other hand is a running game from Gameloft. More of the likes of Temple Run, Subway Surfer etc.

Gru’s loyal yellow gibberish-speaking Minions are ready for their toughest challenge in Despicable Me: Minion Rush. Play as a Minion and compete with others in hilarious, fast-paced challenges in order to impress your boss, (former?) super-villain Gru!

ALL THE HEART AND HUMOR OF DESPICABLE ME
• Enjoy unpredictably hilarious Minion moments
• Perform despicable acts through hundreds of missions
• Run through iconic locations, which are full of surprises, secrets and tricky obstacles: Gru’s Lab, Gru’s Residential Area, and El Macho’s Lair!
• Customize your Minion with unique costumes, weapons, and power-ups
• Battle Vector and an all-new villain exclusively created for the game

AN INNOVATIVE AND ORIGINAL GAME
• Encounter secret areas, unique boss fights and amazing power-ups
• Experience custom animation, voiceovers, and state-of-the-art 3D graphics
• Enjoy multiple dynamic camera angles
• Engage in various bonus gameplay modes:
→ Destroy things as Mega Minion
→ Collect bananas while riding the Fluffy Unicorn
→ Hang on to Gru’s Rocket for the ride of your life
• Have fun with your friends! See their best scores during your run, and send them funny Minion taunts and challenges to show them who’s going to win Minion of the Year!