Update – The info around now points at 14th April as the new release date (which of course can change too). Microsoft at the Build event did make it official that the update would go live to Developers in first part of April so 14th April sounds quite credible.

We have heard about so many dates for WP8.1 Developer Preview release and why not, speculations were bound to happen considering that it is one heck of an update and has turned everyone excited.

It started with rumors of release at Build Conference (2-4 Apr) then reports came stating that it is delayed by a couple of weeks then again rumors came that it would release at the Build Conference itself and now a new information coming via WPC states that the ‘Developer Preview’ for Windows Phone 8.1 would go live this Apr 10th.

Well lets hope this info turns out to be correct.

Meanwhile you can check our coverage on Windows Phone 8.1 by clicking here.

For those who don’t know how to enroll for Developer Preview Program. Here’s the process.

Read below on how to bypass OEMs/Carriers and get early access to all those Windows Phone updates directly from Microsoft.

In the month of Oct 13, Windows Phone Developer Preview Program went live .. . meaning the developers can download the latest WP OS update (next is WP 8.1) once on release by Microsoft and can test their apps fully before the original OS update goes live (from OEMs/Carriers).

How a normal user can get the update 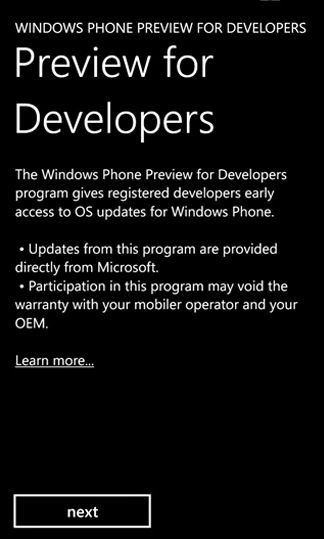