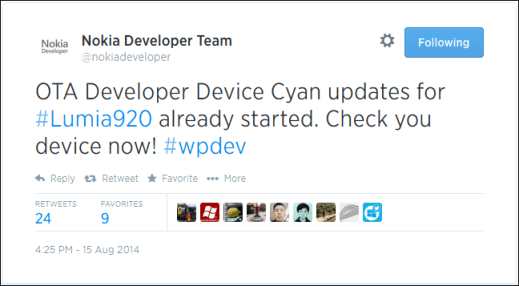 Update – Sorry for making you curious but we might have misread the tweet which says ‘Developer devices’ and not ‘Developer Preview devices’ – both of which are different. However the unanswered point at this moment is when a Developer Preview (Developer device running the Preview version) running device can get Cyan then either the fix is in place or MS/Nokia can segregate Developer devices from Non-developer ones. We will update the story on firm confirmation. Thanks Daniel (from WPC) for highlighting this out!

In all take it as a No, the Developer Preview devices are not getting the Lumia Cyan update at this moment atleast.

For the update to hit you, Lumia Cyan should be available in your region. If this condition holds true and you are on DP then it’s time to check for updates and hit the update button.