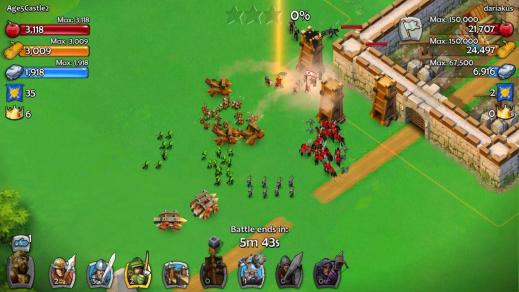 Announced a few weeks ago, ‘Age of Empires: Castle Siege‘ from Microsoft Studios has officially hit the Windows & Windows Phone Store. It’s a jackpot as the game supports 512MB RAM WP devices and if that’s not enough then it comes with Xbox Live integration too.

Age of Empires: Castle Siege brings all the strategy and combat Age of Empires is renowned for along with a fast-paced experience that’s great with both touch as well as mouse and keyboard. Choose from one of several civilizations, expand your castle into a massive city, defend your walls against marauding empires, and when your newly trained army is ready, lay siege to other castles built by online opponents. You can connect with your friends on Xbox Live and battle friends across devices running Windows 8 or Windows Phone 8. Your game program will also roam across your own Windows devices and is always saved to your Gamertag.

Age of Empires®: Castle Siege invites you to guide your empire through the Medieval Era on your Windows PC or touch screen device. Choose from one of several civilizations, including the Britons, Teutons, and Kievan Rus. Upgrade your keep, fortify your walls, and garrison defensive troops to protect yourself from marauders. Then, train an army to raid other cities, and command them in battle to dismantle your opponents’ defenses.

Over the ages, you’ll research technology, live through famous battles, and recruit a variety of heroes to your side, including Saladin, Richard the Lionheart, and Joan of Arc. Outsmart your attackers and outplay your victims to earn achievements and climb to the top of the leaderboards.

Take command, and make your mark on history!

* Age of Empires®: Castle Siege requires users to sign into Xbox with a Microsoft account to play.