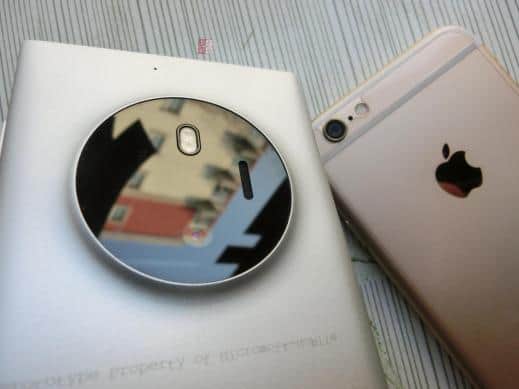 Yes the purported Lumia flagship called McLaren with 3D touch which Microsoft had been readying for the Holiday season is cancelled. This is not a news, it has already made headlines on the web couple of times in the past.

But I had to remind this myself time and again because lately new images of McLaren have been doing rounds quite frequently. Is Microsoft wanting the fans to hang-on to Windows Phone with these teasers? . Who knows?

McLaren might be cancelled but a new Lumia flagship in the name of Lumia 1030 or Lumia 1040 may appear. Chances are less though.

Check out this stint of McLaren posing alongside iPhone 6

As mentioned earlier, McLaren was supposed to be first Lumia device to feature the 3D touch technology from Microsoft and one of the leaked features that made highlights in the past pertaining to 3D touch was MixView where a click on specific portion of the app tile would reveal the relevant options like for eg. On clicking the Facebook tile, you would get options like Check-in, Status update, Messages etc so that you can easily navigate to them. Such a design is what you would have seen on Zune in the past.

Now Windows Central is reporting that though McLaren might be cancelled but some of the unique features of it could make it to Windows 10 and I am of the opinion that we might even see them at the Windows 10 event scheduled by Microsoft on 21st Jan 2015.

Heres how MixView is defined by Windows Central

…you can select the Facebook tile, just press for a second in a special part of the tile, and three new tile come on top of it, showing you notifications, messages, etc. You later press somewhere outside the Facebook tile, and it goes back to normal. It gives a new meaning to the whole live tile thing. I assume the Facebook feature is only a hint of the many uses this new feature could have, such as controlling music and messaging apps.

the special part of the tile refers to an ellipsis graphic near the bottom right corner. Taping this reveals smaller, actionable tiles.