One of the things that has been haunting an existing Android user (or even a Windows Phone user) from switching to a new Windows Phone, is the inability to transfer the SMS back-up.

The above statement would have been true had it not been for Nokia (now Microsoft), the company always knew what the customers wanted. Nokia had built in-house a bunch of apps for Windows Phone & majority of them were a hit.

One such app is ‘Transfer my Data‘, the app that you will be using the first to transfer contacts from your past device to a new Lumia and believe me it works like a charm (be your old device be Apple, Android, Symbain, Blackberry or Windows Phone). The app also has the ability to pull messages & pictures from your old device if it falls in the list of compatible devices.

Transfer my Data got its last update about one & a half months back bringing in one of the most wanted features of copying Text & MMS messages from and to an SD Card. Yes which means that if you are owning a Lumia which supports Micro-SD card then you can save all your Texts & MMS messages to the SD Card as well pull an old back-up from the SD Card to your device.

Here’s how it works (its extremely simple) 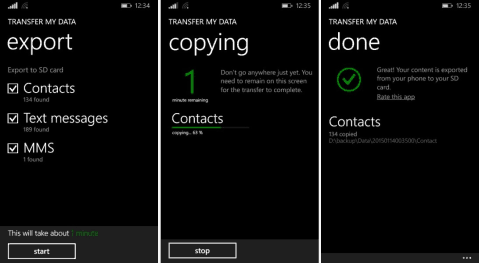 I hope the above tutorial does the trick for you!

Grab ‘Transfer my Data’ from Windows Phone Store below