Windows 10 for all Phones? .. Not likely

Well we heard from Microsoft in 2014 that Windows 10 will be available for all existing Windows Phone 8 devices & which was a great news for all.

21st Jan we saw Microsoft unveil Windows 10 for Phones & it was very well received by the fan community & media. Unfortunately then came the bad news, when Chris Weber, Corporate Vice President of Sales for the Microsoft Mobile Devices group, in a post over Lumia Conversations revealed this

We’re making it as easy as possible to get Windows 10. Windows 10 has been designed to run well on today’s Lumia phones. Like any upgrade to a new platform, not every phone will upgrade or support all possible Windows 10 features, and certain features and experiences will require more advanced future hardware. Our goal is for the majority of the Lumia phones running Windows Phone 8 and 8.1 to join the Windows ecosystem along with an expected hundreds of millions of PCs, tablets and other devices running the next generation of Windows.

To support the above, Microsoft today released an update to its Phone Insider app. Post the update, the app is now re-branded to Windows Insider and reveals one critical info that Windows 1o for Phone will indeed require some system requirements to be met. 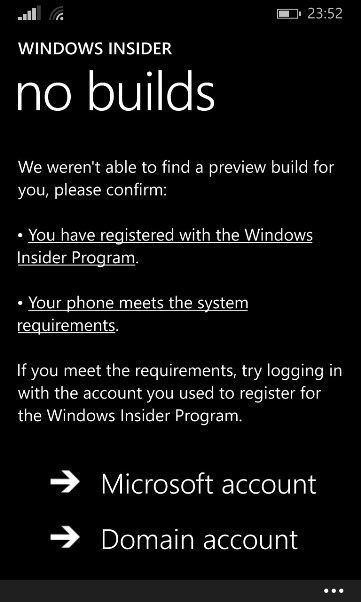 What this system requirements mean is not yet known. First thing that comes to anybodys mind is, will Microsoft ditch the 512MB RAM devices which include the highly popular Lumia 520 and Lumia 630/635? .. Looks highly unlikely to me.

If you look at Chris Webers statement not every phone will upgrade or support all possible Windows 10 features, and certain features and experiences will require more advanced future hardware, you find 3 options

The first option I feel is for devices with less RAM and less internal storage (& no expandable memory). The second option is where most older devices (like 520) & some new ones will fit. Third option is where the high-end devices like 1520/930/Icon will fit. Yes this is a speculation from my side so do take it that way.

The good news though is that Windows 10 for Phone is not far away and an update to the Phone Insider app at this time means that we might see it sooner than later. For those not aware, Phone Insider now Windows Insider is similar to the current Preview for Developers app found on Windows Phone 8.1 devices which gives you access to early OS builds. One difference & the major one though is that Preview for Developers gives you access to early RTM builds which are quite reliable and stable, while Windows Insider would expose you to builds that are in their very initial stages and which might be unstable & could cause problems.

By the way, did you notice that Windows Insider app is available for 512MB RAM devices .. you got my point right!